While working on a reverse engineering project (a malware sample written in Objective-C++), I noticed a certain motif which always appeared whenever the program was dealing with C++'s std::string objects. The motif can be seen below.

A Tale of Two Layouts

The first thing I did is write a small example program that takes two strings and appends them together, printing the result. The disassembly displays something similar to the program above

This at least meant I was on the right track; the pattern is related to std::strings, and not something else.

At this point, I decided to look into the clang's libc++ source code and find out how strings are defined. The string definition is found in include/string. This is a giant file full of template stuff that I didn't fully understand but no matter, searching for "layout" gave me some results. It didn't take long to find that there are different kinds of string layouts.

There are three types of layouts (but only two are important for my purpose): long, short, & raw. Technically, there are two alternative definitions of the long and short layouts, which depend on whether or not _LIBCPP_ABI_ALTERNATE_STRING_LAYOUT was defined at compile time. As you might guess, raw is a C-style char buffer. The long string layout goes like this:

while short string layouts look like this: Looking up the types, I found that
typedef typename __alloc_traits::size_type size_type;
and
typedef _CharT value_type;
This is yet another layer of indirection. Strings are created from a template, basic_string, and require three template parameters: class _CharT, class _Traits, class _Allocator.

Returning to the disassembly, I looked at what string greeting("Hello, "); compiled down to.

I wondered why the xmm register was showing up here. This is a compiler optimization. On my architecture, the xmm registers hold 128 bits, or 16 bytes. First 128 bits are zeroed out, followed by zeroing out the contents of a quadword. This means it's zeroing out 24 adjacent bytes -- just enough for our string. This is another motif that apparently appears with C++ strings, at least with compiler optimizations turned up. At this point, I started up lldb and dumped the memory holding the "Hello, " string.

Notice that the most significant byte is 0x0E. This confused me, I thought it was supposed to be the string's size, but it's not 14 characters long, it's 7. Jumping back to the libc++ source, I looked at how strings are initialized.

When creating a short string (i.e. a string whose length is less than __min_cap == 23 bytes), a call is made to a function called __set_short_size. On a little-endian CPU, this function looks like:

Now let's see how a long string is set up. In this example, the string is obtained as the first program argument, i.e. argv[1]

It clears 24 bytes for the string in the same manner as it did for the first string. This time, since the string's length isn't known at compile-time, a call to strlen is made. This isn't so different from how the short string was setup.

The capacity of long strings are stored in a special way. When setting the capacity, a call is made to __set_long_cap, defined like so:

Now that the strings are created, it's time to append the user-supplied string to "Hello, ". In the picture below we can see, first, how a string's layout is determined, and how the data is loaded into the registers.

Here, the user-supplied string rests on the stack in the 24 byte span from [ss:rbp+0xffffffffffffffd0] to [ss:rbp+0xffffffffffffffe8]. The compiler doesn't know what layout was chosen, so it must be determined at runtime. It's apparent from the disassembly that this is achieved through bitmasking the string's first byte with 0x01, followed by a test. If the zero flag is 1, it's a short string, if it's 0, it's long. Going back to the disassembly I showed in the introduction, we can now properly interpret what's going on.

If a string whose size is greater than or equal to __min_capacity (23) is given, then the string's __init function sets the capacity like so: size_type __cap = __recommend(__reserve); This recommend function is defined as

this function needs the __align_it function and __alignment to be defined as well: This is a bit of a mess. In this case, __align_it will round down the input to the nearest multiple of 16 followed by subtracting 1. Hence __recommend always return an odd number. Furthermore, it's easy to see from __set_short_size that any short size value stored will be multiplied by 2, making it even. Thus there's no risk of confusion between long and short strings.

I created a program that calculates the recommended capacity, given a string length, and plotted the values. 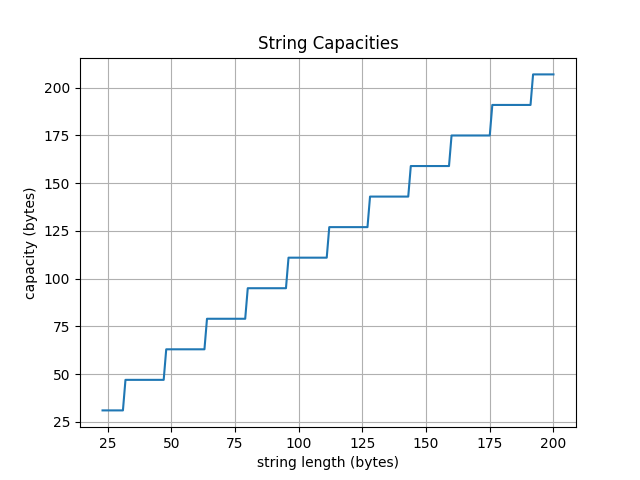 My goal was to understand the pattern of assembly code shown below:

As demonstrated above, it's checking the layout, followed by loading the string's data and size from the appropriate locations. I had a lot of fun diving into libc++ and gaining a better understanding of what's going on with C++ strings, and reversing C++ programs more generally.
If you have any comments/corrections, you can email me or contact me on Twitter @eu90h.
Thanks for reading!